We Are Living in Sensational Times Here

Charged with giving the funeral oration for his friend George William ‘AE’ Russell (1867-1935) in July 1935, the writer Frank O’Connor stated that if Russell

‘had devoted himself to one art only, he might have been amongst the very greatest figures in the world; but if he had done so, he would not have been AE, and Ireland, and we, would have been poorer for that.’  (Irish Times, 22 July 1935).

Russell’s interests were as diverse as they were prolific. Known as a poet, painter, writer, journalist, activist, and administrator, his was a life coloured by countless shades, and marked by many fateful twists. This array of activity is nicely rendered in a letter written by Russell to the American arts patron Joanna Fortune in January 1920, and now held in the Centre for the Study of Irish Art, one of nine items in the Centre’s Russell Collection. 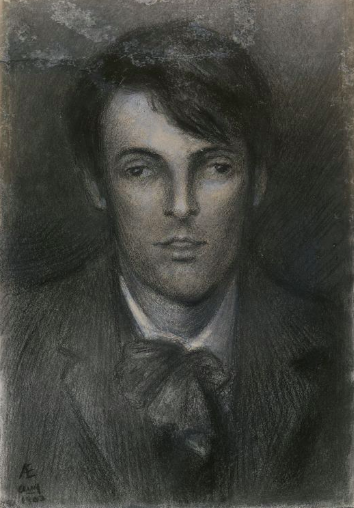 Written from Russell’s home at 17 Rathgar Avenue, Dublin, where he and his wife Violet moved in 1906, the letter opens with a rather vague allusion to a growing ‘movement’ with which Russell is involved. This movement was in fact the Irish co-operative movement, which had been galvanised in 1894 with the formation of the Irish Agricultural Organisation Society (IAOS) by Sir Horace Plunkett. Russell began work with the Society in 1897, and became its Assistant Secretary the following year. His activism and writing on the causes of rural development and economic sustainability would mark much of his later career. He was made editor of the Society’s journal The Irish Homestead in 1905, and spent his tenure advocating forcefully for the careful stewardship of domestic resources and cooperation between rural communities and agricultural societies. The Society continues today in the guise of the Irish Co-operative Organisation Society, with 150,000 members, an increase of 30,000 since the time of Russell’s letter.

In his  correspondence Russell subsequently turns to his artistic passions, hinting at the nature of art appreciation in Ireland, writing to his American friend that the country suffers from

‘a famine of praise. We have so many clever writers here that there is not enough of a public for them. No literary man could keep himself alive by his Irish sales. But it is a good country and it is the best place for people suffering from egomania to get cured in. There is so much wit and intelligence that the slightest eruption of egomania gets instant psychological attendance and the patient either gets cured or else flies from the cure to other countries where his favourite disease is fostered.’

Russell’s own professional acquaintance with the Irish literary and art scene made him a keen observer of its foibles as he saw the ebb and flow of successes and failures amongst such friends as W.B. Yeats and James Joyce.

The rarefied world of the Irish arts is soon overshadowed by Russell’s description of the ongoing turbulence of the Irish Civil War and the Great War in Europe.

‘We are living in very sensational times here’,

‘the war has made most people quite mad and irresponsible… We have a Republic in operation but suppressed, and about 400 prominent Republicans on the run from the police … every day we hear of raids of arms, attacks on police barracks, shootings, and imprisonments with or without cause shown. Occasionally a town is wrecked and persons of quiet minds like myself do not know what to turn to or what cause to ally oneself to.’

Russell would go on to support the Free State Government during the Civil War, with a firm practical focus on the greater need to secure finance, employment, and security for the country and its citizens, as nurtured in his work with the cooperative movement. Alongside such a rich tapestry of social history, Russell’s letter also hints at the power of the press to shape or distort public opinion in times of turmoil, writing that

‘of course in our papers one only reads what is considered suitable or harmonious with our own ideas and we are probably as ignorant of the facts as if we had no news at all. Half news is probably more misleading than no news.’

A timely observation, even today.

In one succinct letter, we can easily trace the threads of Russell’s diverse interests and activities, offering a useful insight into his thinking and work at the time. Joanna Fortune, a well-to-do native of Chicago, supported literary publications and artistic efforts amongst friends and acquaintances. The friendship cultivated with Russell has resulted in a legacy of valuable archival correspondence held both in Ireland and the United States, for it is often in such correspondence that artists give more freely of their private selves than ordinarily revealed in public spheres.