A Fan of Poetry

Elizabeth Corbet 'Lolly' Yeats (1868 – 1940) was a person of many talents. She was an educator, designer, landscape painter and printer.

In 1902, she founded the Dun Emer Guild alongside the designer Evelyn Gleeson  (1855–1944) and her sister and fellow artist Susan Mary Yeats (1866–1949). Susan and Elizabeth later co-founded the Cuala Industries following a professional split from Gleeson. Located in Dundrum, Co.Dublin, the Cuala Industries employed local Irish craftswomen in the making of textiles and printed materials for sale. 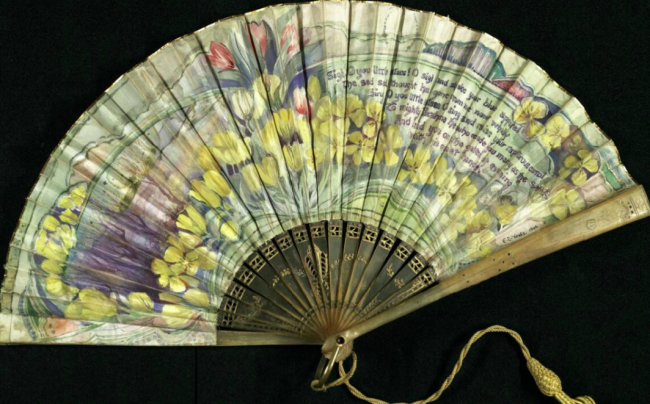 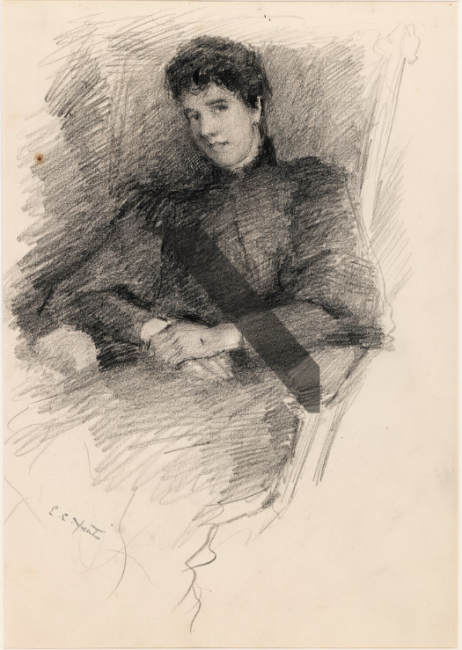 Fan for a Poem

There are several examples of her work in the Gallery's archival collections, including a delicate folding fan that Yeats hand-painted while working at the Cuala Industries in 1905. The fan is made of watercolour on silk and engraved tortoiseshell. It features a decorative landscape superimposed with pansies and crocuses, which frames woodland on the left and an inscription taken from the poem 'Anashuya and Vijaya' by William Butler Yeats, a lyrical poem written in 1887.

The sad, sad thought has gone from me now wholly

To mighty Brahma, be who made you many as the sands,

And laid you on the gates of evening with his quiet hands."

Excerpt from Anayusha and Vijaya as painted by Elizabeth Corbett Yeats, written by William Butler Yeats and published in The Wanderings of Oisin and Other Poems in 1889.

As well as being a beautiful piece of art and a luxury item, Elizabeth's fan is also a great example of the hand-painted Art Nouveau style fans which were popular at the time, inspired by earlier fans brought into Europe from Northeast Asia.

Although earlier fans were often expensive status symbols reserved for the nobility, by the nineteenth-century technological advances ensured that folding fans made from paper were available to a much wider audience.

Decorative, hand-painted fans like Yeats's took a lot of time and care to make and were often constructed in expensive materials like silks, feathers, gold leaf, ivory or tortoiseshell. The artists who painted these decorative fans were often women who signed their work, as Yeats did.